We made our last interview before the summer vacation with Clarity moms. We were interested in how can they integrate motherhood and work. We asked our three colleagues, Andi, Szilvi and Réka.

Clarity: How many children do you have?

Andi: I have two daughters, both of them are grown up.

Szilvi: Two. A six-year-old boy and a nine-year-old girl.

Clarity: How difficult was it to return to the labor market after having a child? What are your experiences?

Andi: We moved to the countryside to start our independent lives. I couldn't really think about what I wanted as it was hard to make a living with on one income. So, when my older daughter was 2,5 years old, I went to my workplace at that time and asked them to start working from home - it would have been a lot easier for me to carry out my mother tasks because whatever's wrong with my child in the nursery school, I can be there for her quickly. At my workplace, they were happy to see me back, but they couldn't support working from home because they couldn’t provide the infrastructure. So, I was forced to look for another job. In retrospect, I don’t mind it because the new company explicitly supported mothers. The previous company called me back to work as soon as my little daughter has grown up a little. I got a computer to use at home and all the support I needed. As a software developer, it was enough to go to the office for a consultation once a week and everything could be solved from home.

Szilvi: It was easy to resettle – actually a lot easier than I expected. 😊 At the same time, I know that I’m one of the lucky few as I found a part-time job in my profession for the first try, which was also very close to our home.

It took me awhile to get used to work again, but I think I was able to catch-up relatively quickly. Probably because I wasn’t forced to go back to work, it was my decision. Furthermore, of course, the supportive environment helped me a lot.

Réka: My daughter was one and a half years old when we started to feel that my company is not enough for her, as well as the playgrounds nearby didn’t provide sufficient entertainment. This also coincided with an emptying budget, so returning to work was not a question. After one and a half years, I was not so far from previous tasks, clients and operating model, so I was able to continue working where I left off.

Clarity: How can you solve your daily routine to be a superwoman in your work and family too?

Andi:  I am lucky because I got a lot of support from my husband and the grandparents. Maybe the most difficult is to let go at the and of the workday. It’s almost impossible in case of a creative, mental job. When it comes to solve an algorithm and the solution is in your head, it's not like ‘Ok, I leave it now!’ and then continue the next morning.

Szilvi: The biggest difficulty in the beginning was illness, especially when both of my children were sick at the same time and I had to endure at work too. Nowadays "child logistics" requires more planning in advance. I am lucky because there is an "actionable" grandmother who can help me around with the kids, and my work gives me the flexibility (either in terms of space or schedule) to reconcile the two.

Réka: It's all about planning and teamwork. 😉 In times of illness, deliveries and ad-hoc firefighting, we wouldn't be able to solve it without the help of the family. My task is the transfer to and from the nursery school, so I usually return to urgent tasks in the evening.

Clarity: Not too long ago, the summer break has begun, so how can you solve it as a working parent? Have you found exciting camps, and is there a need to mobilize the grandparents too?

Andi: I have up-to-date information about two exciting camps as one of my daughters work in a summer camp. 😊

There is a daytime camp in the Budapest Zoo during the summer. Children love it because they can feed those animals that are not available for normal visitors, so it’s an everlasting experience. The other is the Robotics Camp, where you can learn about computer programs and they can control simple robots by the end of the week.

Szilvi: This period requires quite serious planning. Camps, grandparents, family vacation – this is the way to manage the 10-week break. Fortunately, there are many opportunities, it’s very hard to choose…

Réka: Camps don’t come up yet, as our daughter is still very little. The benefit of family nursery is that it has only 2-week break and we managed to harmonize it with the vacation, so the family will be together.

Clarity: Do you dare to leave them alone at home? It’s a current question especially for Szilvi. But Andi, when did you leave them for first time?

Andi: They were around 14 and I left them for a couple of hours during the day.

Szilvi: I think they are not old enough for this. Maybe another couple of years later.

Clarity: Szilvi, Réka, are you planning to bring the children to the office? Of course, not to work, just to get to know the colleagues and the environment. 😊

Szilvi: They’ve already been here multiple times. Occasionally we couldn't solve it anyway, and they came with me for a few hours while I was solving the urgent tasks. Also, they come to the organized programs, such as the Santa Claus party. They are curious where and with whom I work.

Réka: Not yet, it takes 2x40 minutes by car and she could spend this time with playing… I’d rather not to take the risk. 😊

Clarity: Thank you for the discussion! 😊 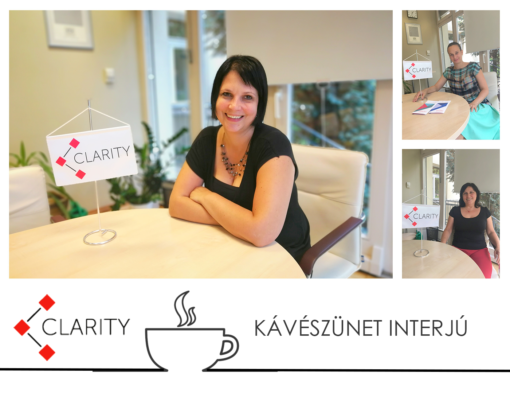